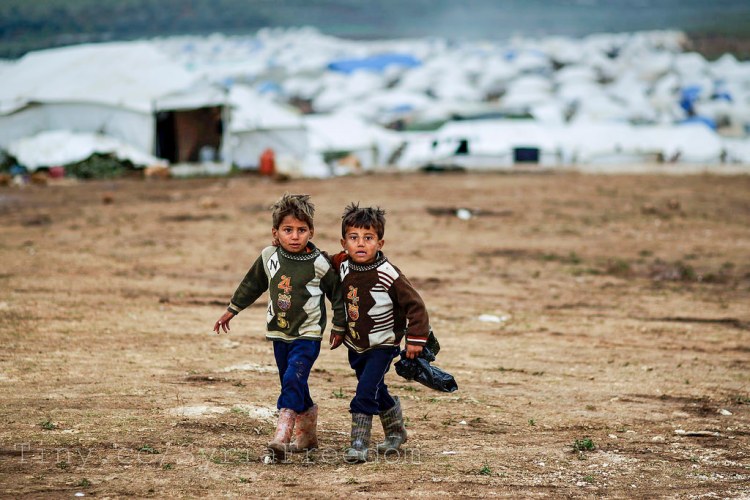 The youth of Syria has been at the forefront of the civil unrest right from the beginning, when seven young boys from the suburb of Deraa spread anti-government graffiti on their school walls. The words sprayed ‘Ejak el door ya doctor’ (it is your turn, doctor) were targeted towards President Bashar Al-Assad, who trained as a ophthalmologist in London, before accepting the office role following the death of his father in 2000.

Little did these boys know their actions that day would spread into a national revolution, starting with peaceful protests and ending in complete devastation.

At the start of the revolution, everyday Syrians would join after Friday midday prayers to chant and dance through the streets. Alongside their mothers, fathers, aunties and grandparents, they would demonstrate against their government and against their leadership—a movement that had never been witnessed before.

Years on, peaceful protests and calm demonstrations are just things of the past. From the young to the elderly, the population constantly fears for their life, with chemical attacks and air strikes being all too much of a regular occurrence.

“I remember being up on a roof watching a battle going on in the distance with a few locals, and they saw a rocket being fired over a hill leaving a very distinct smoke. They all immediately panicked, saying ‘oh my God, it’s a chemical weapon’ and started running around. Of course, it wasn’t but they were already afraid of it,” said Pannell.

According to the United Nations, more than 70-per cent of all national schools are deemed inoperative, with over 2.1 million out-of-school children inside Syria. To add to these figures, it is estimated that 700,000 Syrian children in Turkey, Lebanon, Jordan, Iraq and Egypt are without any means to education.

With no standard schooling available, a traditional education is something of the past. A girl named Nadia, told the UN High Commissioner for Refugees, “…our lives are destroyed. We are not being educated, and without education there is nothing. We are heading towards destruction.”

For many children left inside Syria, the only prospect of education comes from local mosques that have opened their doors to the young. However, there is concern that children who attend these educational sessions are solely taught strict religious study, rather than extra-curricular activities such as maths and languages.

“[Within Syria] you’ve got Christians, Muslims, Kurds, Armenian’s, Turkmen’s, Drew’s and the list goes on. To have one religion that is teaching the majority of the child population, with a very narrow worldview has potentially dangerous long-term consequences,” said Pannell.

And it is not just the educational sector that has collapsed within Syria—the health care system continues to dive into destruction.

Many hospitals in rebel-enforced areas have suffered deliberate bombing by the opposition, leaving civilians, including thousands of innocent children, fighting for their lives.

According to the organisation I Am Syria, there has been more than 470,000 deaths among the population, with at least 55,000 of those being children since the unrest first broke in 2011.

“The conflict in Syria has caused Syrian girls and boys of all ages to suffer immensely, both physically and psychologically. Children have been wounded or killed by sniper-fire, rockets, missiles and falling debris. They have experienced first-hand conflict, destruction and violence,” said UNHCR, in their 2013 report ‘The Future Of Syria – Refugee Children In Crisis’.

With constant worry they will be next, there has been an unprecedented rise in the number of pregnant women going into premature labour. Born into these extremely hostile environments, many newborns barely survive weeks, if not days.

Hand In Hand For Syria is a charity that provides fundamental support to some of the worst-effected areas of the country. In 2013, the organisation opened a specialist hospital in Atmeh (a town in Northern Syria) featuring fundamental resources including ultra-violet lights and incubators.

The story of a pregnant widow who fell into labour while making the dangerous trip from the destructed city of Homs to the Northern city of Idlib, is just one of many moving testaments of the incredible work the charity continues to provide. “Unless you get them to a special unit like that, the chances are they will probably not survive,” said Pannell.

Due to the lack of medical equipment—including basic immunisations and health supplements—diseases that were once irradiated in Syria such as Polio, have become an all too familiar sight. “Kids are not getting vaccinations like MMR and Rubella when they are babies and are now paying the price.”

The young face of war

Sadly for the youth still inside Syria, guns, grenades, fighter jets and helicopter gun ships are not just things they see on television, yet sights that are witnessed everyday throughout their streets.

“It is a lost generation. It is a generation of children who have lost their childhood—their childhood is over. As soon as you can walk you are pretty much a part of the war effort in one way or another,” said Pannell.

Being utilised as anything from messengers to frontline soldiers, it is clear that young Syrian lives are becoming violated and abused as a result of the conflict—a belief that is shared with major organisations including Human Rights Watch (HRW).

In a report released by HRW, a 14-year-old boy named ‘Raed’ tells the organisation about his personal involvement helping the Free Syrian Army—one of the many radicalising rebel groups creating terror in Syria.

“We would help the FSA by bringing them supplies [weapons] from Turkey. We would bring bullets and Russiyets [Kalashnikovs]. All of the kids were helping like this. We were 10 boys between 14 and 18-years-old. I know the guys in the FSA and they asked me to help in this way. I did this for four or five months.”

Raed, explains the time he was shot in the back of his leg while running from the opposition—an injury that will scar him both physically and mentally forever. One of the lucky ones, he was transported over the border to Turkey to receive critical medical treatment that saved his life.

“I’ve had four surgeries and have three surgeries left—I don’t know if I will walk again,” he told Human Rights Watch.

Like Raed, many young boys are partaking in some sort of military action, whether it be on the frontline, or just playing around with their father’s rifle.

“When kids grow up, especially boys, they want to do what the men in their family do, and in their case the men in their society, have guns and are feted as heroes. So of course, when you see children playing, they are reenacting battles and conflicts,” said Pannell.

Priyanka Motaparthy, a researcher for the Child’s Right Division at HRW, suggests that even family members, friends and hierarchy figures within their society can far too easily influence children into participating in armed intervention.

Today, millions of Syrian children face life as a refugee, with an unprecedented percent of that number being under 12-years-old. Research has also identified that tens-of-thousands of families are without fathers, or are orphaned entirely. The consequence? Many children as young as 7-years-old are seen as the primary breadwinner for their family, working in hostile environments that are dangerous and exploitative.

Everyday, more and more children set off on their journey to escape the battlefields. According to the UN, it is believed that over half of the 2.2 million refugees that live in neighbouring countries are under 18-years-old.

Although they may have escaped the cruel conflict, the sights they have witnessed will never leave. Many children are left with ongoing problems such as post-traumatic stress disorder (PTSD), emotional scaring, injury and lack of education—issues no child should have to face.

Jordan is now home to more than 600,000 registered Syrian refugees that are in desperate need of medical and humanitarian care. Zaatari Refugee Camp is one of the most established bases in country, providing shelter to thousands of families.